Ishan Singh at the Regional Youth For Change Conference A trip to the Philippines sounded like all the jazz when I expressed my desire to travel with LCSI's Executive Director, Christy Davis, to the Youth For Change Conference in December 2019. The team had been discussing the “Who’s Afraid of Social Innovation” workshop she would deliver to 50 or so youth from all over Asia, and I thought it would be fun to go along! My role was to co-facilitate the workshop, providing the youth perspective so our session would meet their needs.


It took me longer than I care to admit to work my way through logistics. There was some paperwork involved, four trips to the visa office which really should have been two, and a lengthy phone call with my mum about how I’d be late coming home for the holidays because I had finessed my way into spending the week in Cebu.


With about four days to spare, everything somehow fell into place. I was set to go on my first ever work trip.


We’d spent the whole month designing our workshop for the conference and while I was beyond excited about this opportunity to help facilitate it, I couldn’t help but wonder if I was out of my depth. Our main objective was to introduce the concept of social innovation and establish that it wasn’t something to be afraid of. I was still working on convincing myself of the latter.


It wasn’t long till my worries shifted to more immediate problems: the first one being an early morning flight. Guided by an utter lack of trust in both my alarm clock and my willpower, I decided not to sleep at all the night before. I would soon come to regret that decision as I spent three hours in a middle seat struggling to restrain myself from falling asleep on the shoulder of the stranger seated next to me.


By evening, we found ourselves at the Cebu airport but the road traffic would make it night time before we reached the hotel. I was knackered but our workshop was early the next day and there were still some last-minute preparations to take care of.


The morning rolled around rather swiftly and as I looked around the conference hall during the introduction briefing, I saw myself surrounded by around 50 of my newfound peers, all of whom were involved in social work in some way across different countries in Asia. As I talked to some of them seated around me, I couldn’t help but be in awe of the work they were involved in and the issues they spoke about. Most of them were teenagers and they were already working with social organisations and serving as youth leaders for their communities.


I met Ibnur, from Singapore, who was working on a prototype for a robot to help with river clean-up. And then there was Franco, from Cebu, who went patrolling at night to ensure street children in the city got back to their families at curfew. It made me realise how social work can take a variety of shapes and forms and how the nature of problems faced by different communities can be worlds apart. World Vision, the conference convenor, had managed to bring together a host of people from very diverse backgrounds and despite the very apparent issue of a language barrier, everyone was willing to put in the effort to get to know each other because they all realised that they were united by the common cause of trying to make the world a better place.

As Christy started off our workshop, I was pretty excited (and slightly relieved) to see most of the participants interested and actively engaged. It was a far cry from the awkward silence of lecture halls I’d gotten used to over my time in college. We introduced the concept of social innovation, focusing particularly on its application in the education sector. Seeing that most of the participants were schooling not too long ago, we felt education was a topic they would be able to identify with. The idea was to have them identify problems within the sector and then guide them through the process of creating a roadmap towards solving them. Our focus wasn’t on the solutions themselves but rather the methods through which potential solutions could be developed. Through interactive games and discussions, Christy and I introduced them to concepts such as stakeholder mapping, combinatorial innovation, and types of scaling for a multiplier effect.


By the end of three hours, we had seven different groups, each of whom had created roadmaps towards tackling their chosen problem. While this in itself showed us that they had taken away something useful from our presentation, it was even more inspiring to see some of the participants sharing their work with their friends through social media, hoping to figure out if their plans could actually be implemented.


As our workshop came to a close, we were quite satisfied with how the day had turned out. We received some good feedback to tweak the session for next time, but for a first-ever run through, I felt like we’d managed to get the right message across and everyone was very engaged. I’d have to wait till the following day to find out if this was true or not.


A good night of sleep later, I woke up free from the nerves that came with co-facilitating, but I still had reason to be anxious. This day’s workshop involved participants working in groups to come up with solutions to various social issues prevalent in the Philippines. Ideally, they would do so by using concepts we’d shared in our workshop the day before. Fingers crossed, I hoped they still remembered them.

As I was no longer facilitating, I found a group to be a part of myself and we decided we’d tackle concerns regarding the spread of HIV and AIDS in the Philippines. Our group comprised seven people from four different countries. Some of us couldn’t imagine a place with a lack of access to basic healthcare facilities and some of us called such a place home. There was a very apparent disconnect in the ideas we shared with each other, stemming from our respective backgrounds and experiences. Needless to say, we had a fair bit of trouble understanding and communicating with each other. That being said, the process of overcoming such obstacles over the course of the next two days proved to be the most fruitful part of my experience at the conference.

Field Visit To Understand Development Challenges In The Philippines


In order to find out more about the nature of the problem we were trying to tackle, we went to poverty-stricken districts within Cebu City to conduct field research. While there, the locals in our group helped translate as we conducted interviews with healthcare workers and other residents belonging to these different communities.

For most of us, it was our first time being in such an environment. It was an eye-opening experience walking through narrow slum alleys on pavements decked with sewage water. The smell was almost unbearable and I wondered if those who lived there had simply gotten accustomed to it over time.


We saw homes that were no more than holes in a wall or tents made out of cardboard or inhabiting crypts in a cemetery. Literally. In some of the more open areas, there were people lounging around in the middle of the day. I was surprised by how welcoming they were with their greetings as we walked by.


It was a different world altogether, filled with its own intricacies and nuances.


I remember a tattooed man sunbathing without a worry, roosters chained up and being prepared for fights, a woman with a smoke in one hand and a baby in the other... A group of guys played pool with a broken cue stick on a table they’d parked in the middle of the road. A lady washed dishes in a makeshift tent while blasting Bowie on a loudspeaker.


I’m still trying to figure out what I make of it all.

Anyway, we used the data we collected over the course of the field trip to come up with a recommended solution to tackle our problem. To be honest, we couldn’t come up with anything particularly groundbreaking. In fact, the solution was mostly made up of initiatives that were already being undertaken. To be fair though, I don’t think anyone expected us to do better than that in two days. The important part is that we learnt how to go about devising said solution; a way of thinking we can use not just for this problem but for any we might face in the future. We learnt how to work off of each others’ strengths, how to collect first-hand information, and how the concepts we’d been taught translated to the real world.


My trip to the Philippines was eventful to say the least. I thought I was going there to flip slides for a presentation. I’m glad there ended up being so much more to it!

Ishan Singh is a second-year undergraduate at the Singapore Management University’s Lee Kong Chian School of Business, and an Editorial Assistant for Social Space, the Lien Centre for Social Innovation’s flagship content platform. 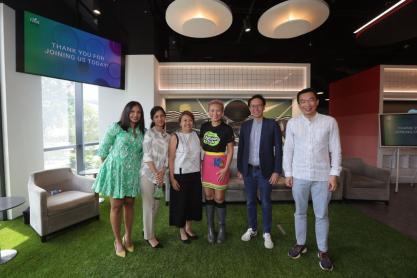